“It’s
not that I woke up one morning with the decision to paint Biblical
scenes. Rather, the Bible stories flowed to me by themselves while I
worked. 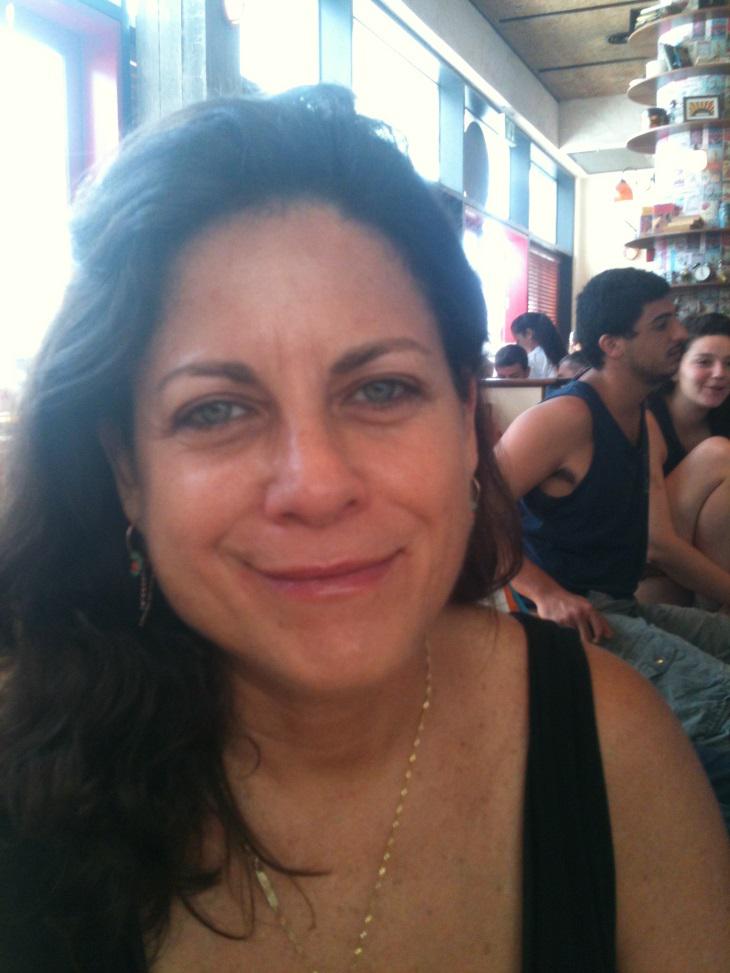 In
2006, my friend Dvora Uzan asked me to paint a circle of dancing
Hassids. At the time, I was painting in my living room with my family
around me and the TV broadcasting the Gush Katif (Gaza strip)
settlements evacuation. The broadcast was live, showing all of the
pain and rage that the evacuated citizens felt.

I
should mention that my military service, in the Nahal, was at the
Nahal settlement in Katif.

For
a moment, the camera caught a circle of evacuated citizens, dancing
with force and power, to strengthen and empower themselves. For me,
at that moment, the circle of dancers became the “Disengagement
Dance“.

After
a short while, I was asked to paint the evacuation of Ammona, after a
newspaper photo cutout. This led to the creation, in six months, of a
work I called “The
Ammona Evacuation“,
in which I have animated the terrified horse in the eye of the storm,
frightened among pillars of smoke, fire and people in rage.

Since
that time, painting has become a tool for me, to express emotional
situations from the Bible as reflecting my personal emotions, and I
decided to paint the “Daughters of Zelophehad” scene. In
1985, when my father, the late Moshe Wexler, died, my mother asked me
to go to the Rabbinate in Haifa with my two brothers, to release the
inheritance in her favor. When our turn came to enter the Rabbis’
office, the Rabbi stopped me and said: “since there are two
sons, you don’t have a right to your father’s inheritance, as a
woman.” I was astonished, offended and struck by my helplessness
facing the injustice just because of being a woman.

22 years later, I
painted the “Daughters of Zlophehad”
scene as empowerment to women, after which more and more Bible scenes
came flowing. 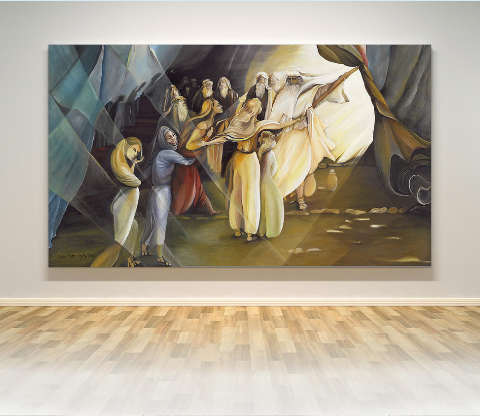 In
2007-2008, while the town of Sderot was being targeted by missiles
for eight years in a row, before the government elections in which
Tzipi Livni took part, I painted “Then
Sang Deborah”. During my work, which
took about six months, and while my studio was built by the “Arab
sector” from morning till nightfall, the Gaza War (Operation
Cast Lead) began. Peretz Moshe from Peretz Construction Negev
Company, a resident of Sderot, saw the painting and bought it.

The
building of my studio took longer than expected and while my family
and I in particular were suffering from this situation, I found
myself creating a sketch of “The Casting
out of Ishmael”. Considering what the
story means to me, the Biblical scene that I choose to paint was
intended to reflect my emotions at the time and help me balance my
feelings, empower and strengthen myself and have a clean start from
which to go on, without any negative residues from the past. 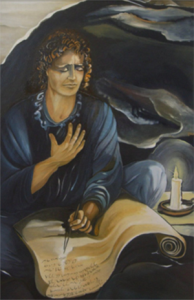 is the man who walks not
in the counsel of the wicked, nor stands in the way of sinners, nor
sits in the seat of scoffers…
He is like a tree planted
by streams of water,that
yields its fruit in its season, and its leaf does not wither.In all
that he does, he prospers…” This is the
beginning of a prayer written by King David. It gives me strength,
balances and directs me, In
this painting, I have built a sketch combining the prayer text with a
legend written by Ben Sirach. The “Book of ben Sirach”,
known as “Proverbs of ben Sirach” or the “Wisdom of
ben Sirach”, is one of the most well-known of the
Deuterocanonical books, in terms of the number of references in
Jewish sources and its popularity among both Jews and Christians. The
book was not included in the Hebrew Bible and was considered lost,
but was preserved in the Christian Bible as part of the Old
Testament. The legend of Ben Sirach is about the wasp and the spider.

The
text appears as part of the Book of Psalms series and is written in
the ancient Hebrew script, without vowel letters.

“Now
therefore, O kings, be wise; be warned, O rulers of the earth…”
meaning, from this time on, understand this, kings of the nations,
and take a moral warning, lords of the lands. For me, the painting
describes sharing, understanding and love in leadership. 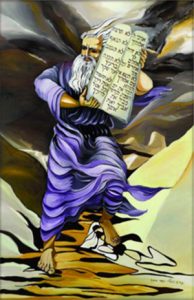 “When Moses came down from Mount
Sinai, with the two tablets of the testimony in his hand as he came
down from the mountain, Moses did not know that the skin of his face
shone because he had been talking with God…”

Since
then and for all times, the Ten Commandments have been the basis of
human relationship. Moses received and delivered them to humankind. 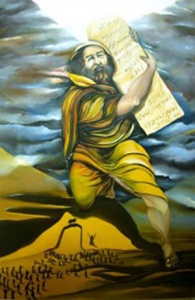 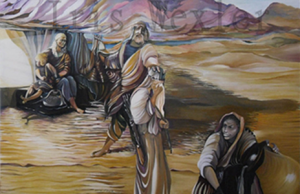 “So
Abraham rose early in the morning and took bread and a skin of water
and gave it to Hagar, putting it on her shoulder, along with the
child, and sent her away” , Since
Ishmael’s birth, his seed envy the seed of Isaac, hate
them and conspire against them. In the painting, Ishmael is crying
and his arrows are directed at Abraham’s loins.

“Then
the woman came and told her husband, “A man of God came to me…”

At
first, Manoah was skeptical about the prophecy that his
wife, ,
told him about. 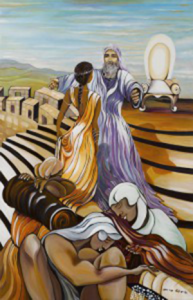 “Now
when the queen of Sheba heard of the fame of Solomon concerning the
name of the Lord, she came to
test him with hard questions. She
came to Jerusalem with a very great retinue, with camels bearing
spices and very much gold and precious stones. And when she came to
Solomon, she told him all that was on her mind.”

“And
he said, “There remains yet the youngest, but behold, he is keeping
the sheep.” And Samuel said to Jesse, “Send and get him, for we
will not sit down till he comes here.”
And he sent and brought him in. Now
he was ruddy and had beautiful eyes and was handsome…”

I
painted David, the shepherd, entering the kingdom of Israel. 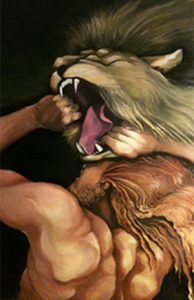 behold, a young lion came towards him roaring. Then the Spirit of the
Lord
rushed upon him, and… he tore the lion in pieces as one tears a
young goat.”

“But
Uriah slept at the door of the king’s house with all the servants of
his lord, and did not go down to his house…”

Uriah
defies King David. I have chosen this topic because of a betrayal I
experienced. 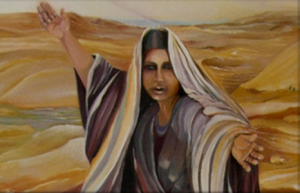 In
2007-2008, while the town of Sderot was being targeted by missiles
for eight years in a row, I painted “Then Sang Deborah”.
During my work, which took about six months, the Gaza War began.

“Like chaff that the wind drives away” – Psalms 1, paragraph 2 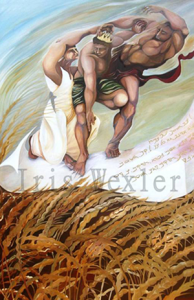